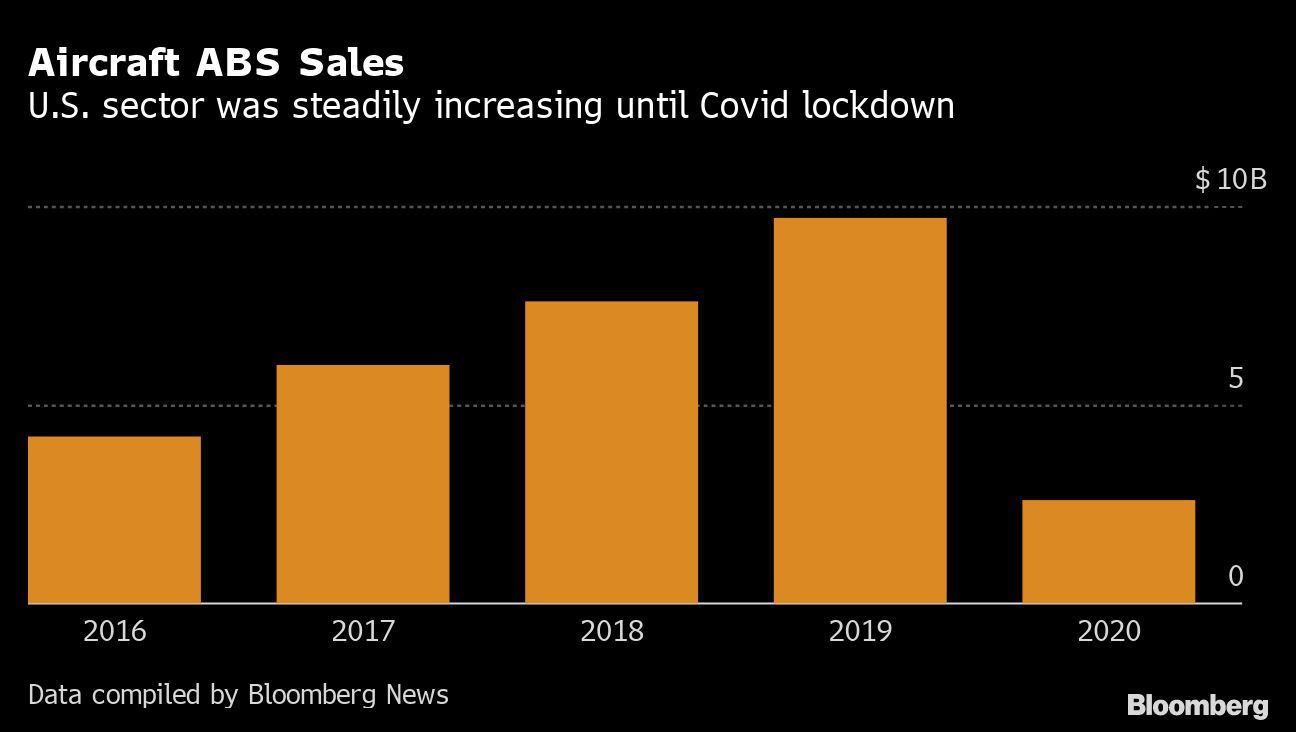 (Bloomberg) — Investors clamored for bonds backed by U.S. commercial aircraft leases this week in the first such offering in almost a year.

Castlelake LP, an investment firm whose businesses include buying and leasing out commercial planes, sold $595 billion of bonds backed by aircraft on Wednesday, reaching money managers that are hopeful the pandemic-battered industry is nearing a recovery, and are hungrier for yield. More aircraft lease deals could be coming in part because airlines have raised so much money, giving them resources to make lease payments.

The biggest portion of the Castlelake deal priced with a yield of 3.5%, a high level relative to other asset-backed securities for sale now. For example, a separate bond, with a slightly lower rating and a 3.4 year average life and backed by subprime car loans, yielded just 1.16% this week.

The yield on the Castlelake transaction was high enough to draw ten times as many orders as there were bonds for sale, according to Jason Callan, head of structured assets at Columbia Threadneedle Investments.

“The assets backing these bonds are super volatile, but there is a lack of yield in the current environment,” Callan said.

Proceeds from the Castlelake asset-backed securities are being used to buy 27 aircraft and their related leases to airlines, according to Kroll Bond Rating Agency, which is one of the firms rating the debt. Investors get paid as airlines make their lease payments, which is still a risk for investors as the companies struggle to recover. The asset-backeds were designed to offer more protections against further downturns in the travel industry than typical aircraft bonds.

For example, if lease collections fall below a certain level, investors in the least-risky securities start to get paid back sooner, according Kroll and Moody’s Investors Service. Nearly a quarter of the leases are two Delta Air Lines Inc., and more than 15% are to state-owned Qatar Airways, which are relatively strong airlines. The leases are longer term, which also reduces risk, according to Moody’s.

The Covid-19 pandemic has roiled air travel and depressed demand for flights, putting the airline industry through the wringer in 2020 and into this year with heavy losses. Vaccines will likely help lift demand for air travel again, but putting inoculations into arms is proving to be logistically difficult in many parts of the world. It’s not clear how long it will take for air traffic to return to prior levels.

Concerns about the strength of the travel industry depressed sales of airline lease asset-backeds in the U.S. after years of steady growth. The last commercial lease aircraft ABS was sold in February 2020, by Willis Lease and Sculptor Capital. There was an offering backed by business jet leases in October, as well. Aircraft ABS issuance was about $2.6 billion in 2020, after 2019’s $9.7 billion, according to data compiled by Bloomberg.

But with the Federal Reserve having lowered interest rates to support the economy during the pandemic, investors are clamoring for yield. Money managers are looking at more esoteric assets than they may otherwise. And airlines themselves have been able to borrow more to pay their leases, said Keith Allman, head of non-flow ABS at Mitsubishi UFJ Financial Group, which helped lead the Castlelake offering.

“The vaccine news seemed to put a goalpost in investors’ minds, and they realized they could start tracking the distribution of the vaccine and compare it to the liquidity positions of these airlines,” Allman said. “It was clear some airlines could extend liquidity for 24 months or more at sustained levels.”

Aircraft ABS prices got pummeled in the secondary market last March as lockdowns kept people at home, with the biggest portions of deals, typically rated A, falling to about 70 cents on the dollar from 100 cents, according to data from MUFG.

Prices began to stabilize in June and some senior portions of deals returned nearly to par by December. The spigot is likely now open for sales to continue their upward trajectory in 2021.

“You’ll see higher-grade lessors who have the ability to show how they managed through the pandemic return to the market this year,” Allman said. “Multiple issuers are expected out of the gate.”